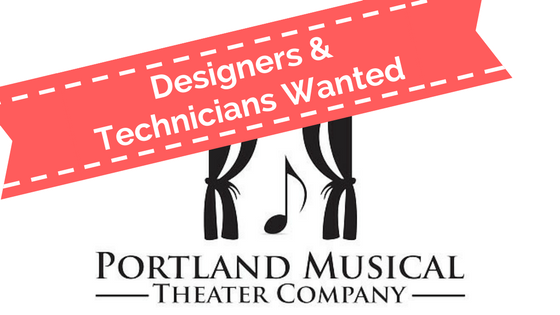 All roles receive a small stipend ($75-$200 depending on the position’s scope) and 2 complimentary tickets.

Interviews will be conducted by telephone and in person.

Please complete the form at the bottom of this page. We will email you with details about scheduling an appointment.  Make sure to check your spam/junk folder.

If you are selected for a position, you’ll also be invited to our Season Announcement party on May 18th at 7:30pm.

We are hiring designers and technicians for three mainstage musicals in 2017-2018:

Exact dates to be determined.

Estimated:
Rehearsals Begin on or around December 15th with breaks for the December holidays.
Performances are Feb 17 through March 11, 2018
All performances are 2pm and 4/4:30pm Saturday and Sunday matinees with up to two each day.

After a successful out of town launch during our 2016-2017 season, THE SENSATIONAL SIXTIES comes to Portland. Featuring songs from Broadway’s biggest hits of the 1960s there’s a little something for everyone in this revue. Set in the theater after their performance ended, a cast of singers passionately debate what was their favorite musical and show tunes of the 60s. As each cast member puts their candidate forward, the entire group breaks into song to celebrate the hits from their favorite show. The revue brings together over 35 Broadway hits from Hello Dolly, A Funny Thing Happened On The Way To The Forum, Cabaret, Sweet Charity, Man of La Mancha, Hair, Oliver, Bye Bye Birdie, Fiddler on the Roof, and more.

Note: Portland Musical Theater Company is Portland’s Only All Musical theater company on the East Side. We are a 501c(3) non-profit, community theater company. Portland Musical Theater Company is committed to objective hiring, and does not consider factors of race, gender or ethnicity in hiring except when such factors are required by playwrights.

Learn More & Tell Us About You Here

Please complete the form below and email your resume to contact AT portlandmusicaltheater.org