Meet Ashley Moore from All Hands On Deck 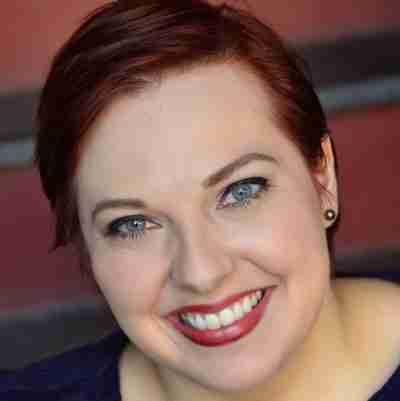 Last week we got to know Deanna Maio the director and leading lady from the cast of Portland Musical Theater Company’s first show of our “Season of Premieres” All Hands On Deck! opening October 20th.

And today we have another fun interview…

Getting to Know Ashley Moore

What sort of person is going to love this show?
Anyone who loves the 1940s classics made famous by greats like Ella Fitzgerald, Doris Day, Frank Sinatra, The Andrews Sisters, just to name a few!

What’s challenging about bringing this script to life?
This show isn’t your average book musical! There are over 40 songs in this show, and each character is fully involved in at least 35 of them… that is a lot of material to perfect! But you couldn’t ask for better material to do it with!

Why did you want to be involved in this production?
The music! I love the music of this era so very much, and who wouldn’t want the chance to perform for “the boys” as they did during WWII?

What will the audience be thinking about in the car as they drive home after this show?
I know the music will stay with them long after the show ends, but the most important thing is the message of unity for our country! We had it then, and we need it again now!

What’s going to surprise people about this show?
The sheer volume of music in this show! There are so many amazing songs that you will know and love! …and maybe a sing along portion 😉

Call someone out by name: who must come see this production?
Of course I expect my husband, Justin, and our one-year-old son, Wally to come! Our little guy loves when I rehearse all the music at home! In addition I fully expect the casts of prior PMTC shows, There’s No Business Like Show Business, The Magical Music of Disney, and The Sensational Sixties to come for sure!

How is your character like you? Different?
Daisy… Oh, Daisy! She is young, scrappy, full of life, and an absolute firecracker! I like to think I share some of those qualities. She’s such a blast to play!

What’s the biggest challenge about taking on this role?
Again, the music! We are a cast of four, so you need to be strong and confident in your part because the majority of music is four-part harmony and NO ONE else is singing your part. You gotta know your stuff!

Besides yourself, what celebrity would you like to see tackle this character?
I’d say Kristen Bell. I just love her! She’s so multitalented, has a great sense of humor, and her look and voice would be spot on for Daisy! Plus she loves sloths!

Besides yourself, which actor in this production is going to blow people away?
I couldn’t possibly choose one! You’ll be blown away by every single one! Everyone in the cast is so incredibly talented!

What do you want to be when you grow up?
Exactly what I’m doing now; be a kick ass mom, wife, and a professional actor and singer.

If someone was going to make your life into a movie, who would play you?
Again, Kristen Bell! I think she could really portray the super serious, sad moments as well as the knock you off your chair, belly laugh moments.

When did you first perform?
When I was five, I played the Mother Pig in the Three Piggy Opera. I was honored with the only solo in the show.

Besides this one, what’s your favorite stage show?
My Fair Lady; it’s the “Perfect Musical!!”

Who do you look up to (as an actor/director/etc.)?
James Cagney

When you have a five-minute break during rehearsal, what do you spend that time doing?
Drilling personal trouble spots in the music, or wisecracking with my fellow cast mates!

Who’s the funniest person in the cast in real life?
Everyone is super funny, but I have to give it to my dear understudy, Caitriona! She is a hoot! …oh, Daisly!

What do you do when you’re not doing theatre?
I am a wife, mother, and love anything that involves the great outdoors!

If you had a magic wand, what show would you do next?
I adore the music of George M. Cohan (my favorite film is Yankee Doodle Dandy), so I would LOVE the chance to play the lead role in George M!

What’s the last thing you do before you step out on stage / the curtain goes up?
Take a sip of water, take a deep breath, and think “ready… set… OVERTURE!”